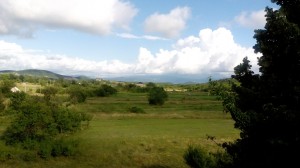 Once upon a time there was this amazing land, placed on mountainous Balkan Peninsula, called Yugoslavia, built on ideas of brotherhood, equality and sharing. I grew up there living together side by side with many cultures and religions. I had wonderful childhood. Everything seemed fine until late 1980-ies. As a teenager in 1980-ies me and my friends listened to rock and punk, watched Hollywood movies and we dreamed of life presented in those movies not realizing how beautiful place we already have lived in. But then, there were all those background stories, fearful stories we children did not really understand. Grownups were afraid of something, something big luring from the backstage of our lives. You see, psychological trauma is something very strong that can infest life of future generations even if they do not know the story that created it.

In schools we were thought that our enemy was fascism and capitalism, but there was another story that remained untold. Yugoslavia was a country with quite a bloody history, the history of wars among the same nations and religions that liberated Yugoslavia from Nazism in the second WW. This union against common enemy seemed to keep all these nations together for some time, building up and repairing the ruins of war, but they never quite let go of the past, the past that no one talked about so the desire to express the suffering imposed on their ancestors remained suppressed. And all of the nations of Yugoslavia had their story to tell. The story of psychological trauma, buried deep inside the collective mind was awaiting the moment to express itself. Trauma should not be repressed, that was the main problem.

When the economic crisis hit the land during the late 1980’ies the hell broke loose. Inflation, unemployment, general dissatisfaction was growing and who was to blame, each other of course. That’s what people do, don’t they. Repressed trauma surfaced with all the fears and horrors of the past. The Berlin wall fell, but Yugoslav nations decided to build new walls. Total collapse was imminent and it hit the land in the beginning of the 1990-ies, starting another bloody war, totally unnecessary.

I was 18 when we fled and I still remember the feeling of fear and hopelessness and anger towards grownups, that could not figure this out and find a better solution.

Memories of busses with women and children driving away to the safer place, people not talking to each other out of fear. Shops cleared of groceries. Totally surreal atmosphere. Friendships breaking up out of fear. Emptiness, emptiness, confusion and lots of sadness. Leaving your home not knowing what will happen to your friends and if you ever will come back. And believe me things can change in a blink of an eye. One day I was in school preparing for my graduation, the next day I was sitting in a refugee camp totally dependent on the good will of people who took us in. My family was relatively lucky, no one died, but all the other unnecessary deaths, split families, lost friendships, ruined homes, all that suffering strengthening the trauma that unleashed it all infesting generations to come. Unbelievable but true. And it happened only 22 years ago.

I write this as some of the signs I see today remind me of the period before the war started in Bosnia. Believe me, war is BS, nationalism is BS, religion is BS. All these things go together and they divide us, and they still are very present today in mainstream media discourse.

I studied psychology to understand all this better and all the readings and my personal experiences, now living in Danmark, tell me that we are getting it, but slowly too slowly, and the reason for that is that we still keep silent about the main reason that creates misery and trauma. Who is who and who is right? Why does it matter who came where first? We all are creatures of this earth, we all share same air, same water, same soil, we all were children once, helpless and in need of love and compassion, we all know how it feels to be abandoned, criticized, unloved, and we all know the liberating opposite of that.

I think we are stuck in our own individual lives, consuming all the toys that come our way, letting others decide what is good and bad, because we somehow believe that things that happen around us and in the world are not our own making. It is always them, they are to blame. We are better. But who are we and who is them?

Addressing the psychological trauma is necessary all around the globe. For the sake of future generations who have nothing to do with the constructs that were made long time ago, the constructs of nation and religion. Why should we pull them into this mess, and it is a mess. There still are wars and hunger, and extreme poverty in the world. In 2014 Oxfam[1] calculated that 85 richest people in the world have the same amount of wealth as the poorest 50% of the world population. Why? Are they really working that hard?

I don’t think so. It is us, who dwell on the bottom of the financial pyramid that promote that by believing that things cannot change, that we are too small to do something, that they somehow deserve to be that rich and we don’t, that we are powerless and what not. It is the same mechanism that made the war in former Yugoslavia possible. People are afraid to say what they really think in their harts and it is much easier to follow the mass, indoctrinated by fear and the leader that showers the masses with hopeful words.

That is our doom, our mass mentality molded for centuries to think that we need a ruler, someone smarter to tell us what to do.

Not all is bad. People are waking up to these facts and hopefully these words will inspire some of you to look further for information that proves that you yourself are powerful human souls that do not have to accept things just because majority does. Things have changed in our history before and there is hope and I truly believe that our children will lift themselves above the constructs of nation and religion, that enslave our minds and souls and activate irrational fears of the other who thinks differently and thereby is our enemy.

The only enemy is our own fear.

With love for truth