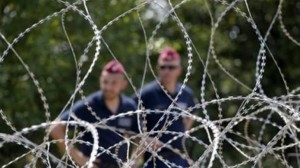 In what is being described as the worse refugee crisis in Europe since the Second World War, tens of thousands of desperate migrants are streaming across EU borders. They have risked their lives to get there, only to be then attacked by EU «border police», or else targeted by racist street mobs. Welcome to Europe!

Destitute and carrying their worldly possessions in nothing but a haversack, men, women and young children are having to outwit truncheon-wielding police ranks in order to try to reach safety. This is in the European Union, whose treaties proclaim to the rest of the world the sanctity of human rights and dignity. Hungary, Romania and Greece have emerged as the new crisis points, replacing Italy as the formerly main refugee route.

Crying mothers run with petrified children jostled on their backs into forests or ditches just to escape from teargas-firing riot police. One distraught woman told a France 24 news crew how she had become separated from her family in the melee. She didn’t know how she would ever find them because she was stranded on the other side of the police cordon. Her missing children and husband had to run away before they were captured by the cops.

One young boy from Syria told CNN reporter Awra Damon that his family and many others were forced back by a phalanx of helmet-clad police officers as they attempted to cross the Hungarian border. The little boy said his family fled an area in Syria that is under control of the Islamic State (or ISIS) terror group – the cult jihadist militia notorious for beheading civilians. (The CNN reporter didn’t seem to notice the irony that her TV channel has previously made heaps of news stories out of accusing the Syrian government as being the one who is terrorising its people.)

What does that say about the Hungarian border police when beleaguered refugees are cowering before them? It’s a graphic condemnation of the EU’s border controls being scarier than blood-thirsty terrorists.

Last month alone, more than 100,000 migrants crossed EU borders. This is a humanitarian crisis on a scale that evokes the harrowing grainy footage showing wandering masses in the aftermath of World War Two.

The vast majority of the refugees to the EU are from war-torn Syria, according to the UN’s International Organisation for Migration. Up to 12 million of Syria’s population – half the total – have been displaced by more than four years of conflict in that country. A war that has been fuelled covertly by the United States, Britain and France seeking regime change against President Bashar al Assad. Also fuelling the war in Syria are Western allies Saudi Arabia, Qatar, Jordan, Turkey and Israel.

The Syrian government has repeatedly said that it is a victim of an international criminal conspiracy comprising the above Western states and allies, who are working in collusion with the so-called Islamic State terror group and other Al Qaeda-linked mercenaries to topple Assad – an ally of Russia and Iran. The little boy in the above CNN report clearly said his family and their neighbours were fleeing«ISIS» not «Assad». But, as already noted, CNN and the rest of the Western news media don’t seem to do irony.

Traumatised and made homeless, the Syrian refugees are now turning to Europe for shelter. Their naive hopes for humanitarian assistance – a basic obligation under international law – are cruelly dashed. It is a fitting, albeit terrible, denouement that these people are bringing their troubles to Europe – the very place whose EU members Britain and France have been most gung-ho about supporting the US-led regime-change war in Syria.

Men carrying children on their shoulders, women carrying babies on their backs, the Syrian refugees have to wend their way through war zones, the ISIS terror networks, then walk for hundreds of kilometres across Turkey – preyed upon by ruthless human traffickers – and then pile into leaking boats to make a treacherous sea crossing to mainland Europe. They do it because they are desperate to survive. Many die along the way from drowning or exhaustion. Pregnant women have reportedly lost their unborn babies on roadsides from sheer fatigue.

And, after all that, when these people arrive at the borders of the EU, they are finally confronted with an army of «robo-cops». In recent weeks, news footage has shown shocking images of police in Hungary and Macedonia (a prospective EU member) firing teargas and stun grenades to turn back thousands of refugees. Other scenes show droves of dishevelled families being herded onto train carriages, to be shunted off to some other European country. They say they were even deprived of drinking-water by the»authorities», never mind medical aid, which was also denied to them.

EU member Hungary has even now installed hundreds of kilometres of shiny razor wire along its border with Serbia to keep refugees at bay. Twenty-five years after the Iron Curtain came down across Europe, a steel razor-wire curtain is going up. This is not the supposedly despotic Soviet Union – it is in the European Union. The organisation that declares human rights to be its foundation and for which it was awarded the Nobel Peace Prize in 2012.

Germany’s Foreign Minister Frank-Walter Steinmeier spoke sheepishly about the EU’s new steel curtain barring war-torn refugees. «We are against the use of fences,» said Steinmeier, mouthing a cowardly euphemism.

This is while EU officials are gathering in Vienna this week to discuss the crisis.

By chance, the capital of Austria was made rather appropriate in light of this week’s grim discovery of some 50 migrants found dead in an abandoned lorry on a motorway in Austria. It is believed they were being smuggled by human traffickers from Hungary inside a meat-packing truck. Austrian police became suspicious of the abandoned vehicle on the hard shoulder of the motorway after they noticed a putrid smell seeping from under its backdoors. The victims had been dead for several days.

German Chancellor Angela Merkel said she was shocked by the»awful» discovery in Austria. She said with hollow words that the EU must act in solidarity to solve the refugee crisis. Solidarity? What is she talking about? Then Merkel added: «The whole world is watching us». Well, she certainly got that bit right for sure.

Last week, in Germany, angry far-right extremists attacked a care centre for asylum seekers near Dresden. Mobs chanted racist slogans, screaming for the migrants to go back to their countries.

Go back to their countries? Yes, that’s right. You know the war zones that haughty European states like Britain and France have ignited and inflamed in Syria, Libya, Afghanistan, Iraq and elsewhere in Africa.

Which makes you wonder: who are the real fascists? The anti-immigrant mobs on the streets, or the coiffured politicians in fancy suits and plush government offices?