Psychology of obedience and war!

War is the stupidest way of solving human conflicts. I have heard people saying that war is a good solution when nothing else works, but how did we get there in the first place? We tend to endure too much and in the end we explode. Why? Is that a part of our evolutional heritage?

War is terrible and believe me I’ve tried it on my own skin during 1990-ties war in former Yugoslavia. In the time of war only one rule applies, which is: Those with guns rule. Having this position makes people terribly cruel and violent. Violence craves vengeance and the vicious circle is thereby made.

I do not support war or the governments that do, whatever excuses they have. Are we being asked when our government decides to support wars? I do not remember we ever have been. What if we could vote every time our governments wanted to use war as a solution? Results would at least show the level of indoctrination in the society. The scary fact is that majority tends to obey the authorities, and if authorities present a convincing and persistant story for the public, the public would support and obey almost any decision made by politicians.

The world is already on fire, if you haven’t noticed and our government is indeed involved. Do you support your government? If you do, then you also support war.

Have you noticed how the information we get trough media is being used as arguments for supporting wars and maintaining conflicts. Mainstream media is wery good at finding pictures of violence and human suffering which support the present political agenda. People are suffering all over the world as we speak, but media does not show pictures of all the suffering, hunger, slum cities, pollution, radiation. Because it is not relevant to US right now.

Do you remember what happened in Syria? We almost went in and bombed Assads forces. Now, there is a new player in the game, the vicious ISIS, and now we kind of support Assad in his fight against the other theroristst. Does this make sense to you? I just know that history have shown that monetary system works very well in the time of war. In the time of war the rules are simple and people tend to obey, and let those in power save us, because war generates a powerful atmosphere of fear and uncertainty.

Here, in this amazing land of Denmark we live quite a privileged life. We actually still live in abundance. There are no shortages of anything. Imagine not having all of that and being forced to struggle to survive from day to day. Uncertainty feeds fear and fear feeds alertness. You would constantly be prepared to fight or flee and most of your energy would be used to get you through the day.

So what should we do to prevent wars? Simply create abundance for all. Is this a naïve proposition? Maybe you think it is, but then I think it is because you have been so thoroughly indoctrinated into present systems paradigm of solving problems that you cannot see other possible solutions. And I am not talking just about humanitarian help.

Our governments tell us that we get involved into conflicts to spread peace, human rights and democracy. We do have quite good relations with certain countries, which have completely different understanding of human rights and many other things. Yes they have oil and we let them live as they choose. You see, its all quite confusing  –  who and when we support and who we don’t.

If this makes you think you can read on and I will try to explain the psychology behind. Why we comply with such obviously destructive actions?

The psychology of obedience

It is well known in psychology that individuals tend to conform to the opinions of the majority and even to inflict pain to make others obey. Some controversial experiments in social psychology have proven the point that it can be quite an easy job to make humans hurt each other in the name of accepted authority.

Social influence comes from many sources. We are influenced by our family, friends and media.  Social psychologist Stanley Milgram wanted to examine the influence of the authority figure on decision making. In 1974 he constructed the most fascinating experiment about obedience to authority.

Subjects of Milgrams study were told that they would participate in a study of “memory and learning”. At the laboratory the teacher-learner scenario was explained and the subjects were led to believe that roles were determined by chance. The “victim” was, in fact, an experimental confederate. The experimenter explained that, by means of simulated shock generator, the subject (as “teacher”) was to deliver increasingly more intense electric shocks to the “learner” each time he/she made a mistake on the learning task. In fact, no shocks were delivered, but the impact of the experimental scenario is so high that all the subjects believe that they are shocking the learner.

Results of the study were quite revealing. The subjects clearly believed that they had administered painful shocks to the victim. Maximal obedience (administering at least 450-v shock) was shown by 26 of 40 respondents which is 65 %. (Ed. by M. Hewstone, A. S. R Manstead, w. Stroebe: The Blackwell Reader in Social Psychology, by Blackwell Publishers Ltd. 1997, pp. 543) 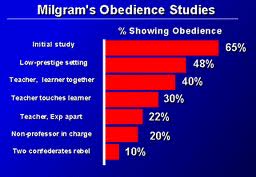 This study provoked many kinds of discussions from ethics to questions about which conditions promote both obedience and disobedience to authority.

We can all agree that this experiment was unethical in many ways and couldn’t be repeated today, but even so it is quite a remarkable study of human behavior we all can learn from. Knowing about this experiment and its result can at least throw some light on how most of the people would function in a clear cut context of power structure, where the individual tends to release himself of responsibility in the name of the common cause, as presented by those in power.

You can also watch a short lecture on Milgram experiments by Stanford Psychologist Philip Zimbardo below (4 min). In his lecture he also talks about us being powerful social models. Promoting goodness creates more goodness. Promoting evil creates more evil.

It is quite possible that you have heard of this experiment before. I am bringing it up now because it is only good for us to be reminded of the fact that the individual who is commanded by a legitimate authority ordinarily obeys. Milgrams study shows that large percent of the people will obey, even if they are asked to inflict pain on other people who have not done anything to harm them.

Just create the context and attach the meaning to it and people will obey.

Think about your life today and all the things and wars that go on in the world. Are you also being obedient by accepting the “fight for peace” paradigm?

Yes, you are just doing your work, not bothering anyone, just doing as you are told. And what is wrong with that?

Just think about it and knowledge will set you free! 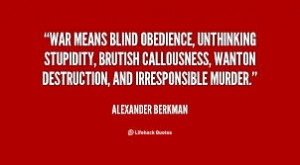