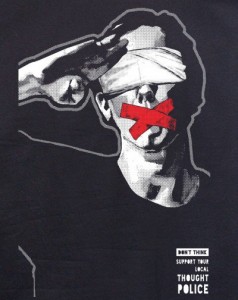 At his recent address to UN, delivered on 25/9-14, David Cameron introduces a whole new term into “the fight against terrorism” vocabulary. He talks of “non-violent extremism” suggesting that UN should support the fight against this new kind of treat to global peace and install a new Special Representative in Extremism.

“The peddling of lies: that 9/11 was a Jewish plot or that the 7/7 London attacks were staged. The idea that Muslims are persecuted all over the world as a deliberate act of Western policy. The concept of an inevitable clash of civilisations…. .But I say: would we sit back and allow right-wing extremists, Nazis or Klu Klux Klansmen to recruit on our university campuses? No. So we shouldn’t stand by and just allow any form of non-violent extremism. ”

Very cleverly he calls non-violent extremist all those who question the official story of 9/11, comparing them with Klu Klux Klan and Nazis.

According to Collins dictionary Extremism is the behavior or beliefs of people who try to bring about political change by using violent or extreme methods….right-wing extremism for example (and in the present debate it is ISIL).

Extremist is a person who favors or resorts to immoderate, uncompromising, or fanatical methods or behavior, esp. in being politically radical.

So, take an extremist and strip him of violent behavior or violent beliefs and you will get, in political terms, a person who uses non-violent means to bring about political change – as fx Gandhi did.

To me it seems that by connecting these two terms Cameron creates a possibility to call extremists all those who do not conform to those officially accepted ideas and truths.

What about Gandhi, should we call him a non-violent extremist or Dalai Lama or any other person who seeks the truth by questioning the world around them and thereby questioning official stories too.

Who is Cameron representing? Who are we and who are they to judge what cannot be questioned and what can? Are we really living in 1984?

Cameron proposes that UN should form Special Representative in Extremism, and how will this representative define non-violent extremism?

The war on ideas and the war on truth is happening as we speak and Cameron’s address to UN is just another proof of that. He argues, in his speech, that non-violent indoctrination with ideas can lead to violent behavior.

“As evidence emerges about the backgrounds of those convicted of terrorist offences, it is clear that many of them were initially influenced by preachers who claim not to encourage violence, but whose world view can be used as a justification for it.”

This is ridiculous. What about social injustice, powerty and lack of education. Isn’t it more important to address these issues instead?

I really am worried that whoever wrote Cameron’s talk, by connecting extremism and non-violence, suggests that we also should fear those who questions continuous western wars, and arguments that politicians use to justify their own violent involvement in conflicts all over the globe.

Are we approaching a future of total idea ban and of total thought police state.

From now on you will also have to be afraid of those who promote non-violence, peace and truth, for they too should be feared and called extremists. Questioning the official story of 9/11 is one of the things, that is according to Cameron an act of non-violent extremism, and should be fought with all means possible.

Cameron’s speech have already stirred some reactions from 9/11 alternative investigators and on the globalresearch.ca you can read an open letter to David Cameron concerning his speech to UN.

So be aware of the words spoken by politicians. All the talks they give are carefully construed to drag your attention towards certain subjects and to assure you that you are doing a good cause by supporting a government that takes care of you and protects you from all forms of extremism. That is the reason why they are in constant war – just to protect you and your future.

Cameron does not want you to question the main cause of all recent wars on extremism in the world, which is the case of 9/11.

Please do question what you hear on the mainstream media or stop listening. Find your own information and check your sources. You will realize that mainstream media is not objective at all and that they write what they are told to write.

Just few days ago a german journalist, Udo Ulfkotte, published the book “Bought Journalist” ( the book is in german), where he comes forward about being paid by members of the CIA to “lie, to betray and to not tell the truth to the public,” during his 25-year career as a journalist in Germany.

Short interview with Udo on RT: