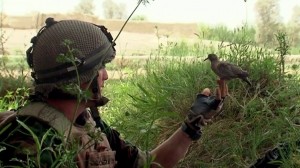 Film maker Adam Curtis, creator of “The Century Of The Self” and “The Power Of Nightmares“, have made another informative documentary about the things that go on behind the political curtain, the things that we do not hear about in everyday news. This time the story revolves around Afganistan, the land that we associate with war, terrorism and opium. Rich with moving images and music the film actually tells two stories. The one is told by the narrator (official story) and the other one is created by images where no words are necessary. This story is yours to make.

The film starts with these words:

“Increasingly we live in a world where nothing makes any sense. Events come and go like waves of a fever. Leaving us confused and uncertain. Those in power tell stories to help us make sense of the complexity of the reality, but those stories are increasingly unconvincing and hollow.

This is a film about why those stories stopped making sense and how that led us in the west to become a dangerous and destructive force in the world. It is told through a prism of a country in the center of the world – Afganistan.”

Whether we will believe those stories or not is up to us. The world is not as black and white as politicians and banksters would want us to believe. There is a war on humans out there, human beings just like me and you. The difference is that they live in lands rich in ressources, and the lands strategicaly placed in geopolitical terms.

Informing ourselves is very important, for as we share more and more information it will become increasingly difficult for the world elite to blur our eyes with simple stories of us and them, the good and the evil, religion and the stories of Western powers as saviors of the free world.

The world is absolutely not free and as long as we turn away from our responsibility to act and as long as we accept the stories created by men with guns we will be run by others, we will have to work more and more to pay for those wars and the luxurious life of the elite and more people will suffer and die. If you want a king then accept to be his slave. I certainly do not need a king or a ruler. I truly think that we can resolve any issue if we genuinely start listening to each other with respect for our individual differences and world views.

You can watch the movie “Bitter Lake” here

BBC documentary ‘Bitter Lake’ is ‘too dangerous’ for TV

"Books recomanded by Jacque Fresco: On communication " The Thirany Of Words", by Stuart Chase, "Science and Sanity." by Alfred Korzybski, On religion: "Man ans his gods", by Homer W. Smit. He could not find these books in a library, because those are the books that would rock the boat."