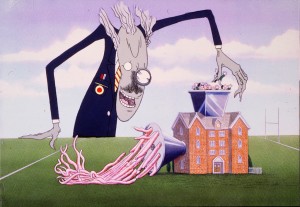 This is a well written article and pretty realistic observations of our modern world that, for those awake and living in the cities, may look more and more like a dystopian movie where people are turning into robot-like creatures that live for the system, which constantly keeps them dumbed down by many different means: consumerism, drugs, movies, race for success and prestige and what not.

It seems that Western world have won the race to control the individual. The westerner have become freely obedient educated slave and the Empire-machine is spreading its sticky hands throughout the world by promoting its “absolutely right” higher education, indoctrinating newcomers who then go back to their own regions and proudly spread the ideas thought by the Empire.

Quote from the article:

Congratulations, Western Empire! You have succeeded where others tried but failed. You have achieved almost absolute obedience and discipline, a total servility.

Tens of millions are lining up, voluntarily, asking to get “educated”, and eventually to get one of those official Imperial degrees. They want to be accepted, certified and praised by the rulers.

Link for the article here: